Want to know how to true a wheel? Get in touch with the Simbaz and book a slot in this month’s Bicycle Maintenance Training at the Kikuyu Simbaz Workshop.

The typical bicycle wheel is composed of a rim suspended with tensioned spokes around a center hub. Each spoke pulls on a section of rim. Spokes coming from the right side hub flange pull the rim to the right. Spokes coming from the left side hub flange pull the rim to the left. Spokes attached at the rim are then offset in a left-right-left-right pattern to counter the pull of the other side. Having all the spokes tight with fairly even tension makes the wheel true and strong. Changes to spoke tension will pull on the rim and affect its true. This process is called “truing”. 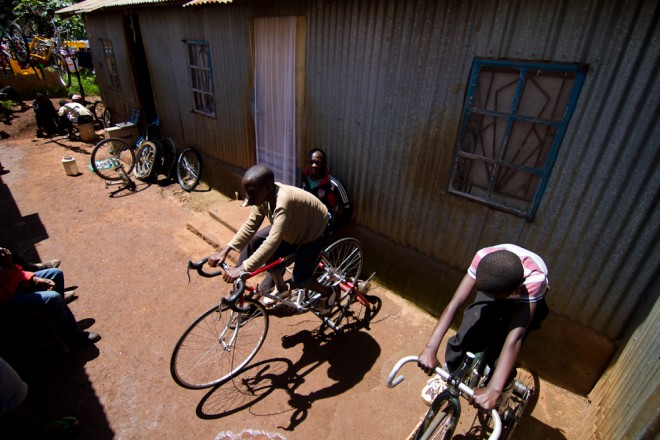 Truing is occasionally needed to keep the rim running straight as it spins between the brake pads. Spoke tension is adjusted by tightening or loosening a threaded nut, called the nipple, at the end of the spoke. Spoke threads typically use right-hand threads. Although a common phrase among mechanics is to “tighten the spokes”, it is the nipple that is turned, not the spokes.

With enough use, especially in wet and dirty conditions, the rim surface can become ground down and thinned. The dirt and brake pad act as a grinder and wear on the metal. The tire, when under pressure, is held in place by the rim sidewall. A worn or thin sidewall may break or fail during a ride. Inspect the rim braking surface for a dished, concave appearance. The surface can also be inspected by running a finger along the braking surface. However, some rims are manufactured with a concave surface when new, so compare the front and rear rims. If they are the same rim models they should look and feel the same.

The lubrication of nipple threads should be done routinely because corrosion and rust in these threads will make the wheel un-trueable. Even if the wheel appears not to need any truing, lubricate at the threads monthly, and then clean the rims of any excess lubrication. Excess lubrication on the rim will affect the braking surfaces. 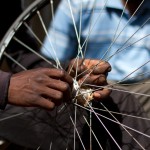 Rims may become damaged from impacts, such as hitting a rock, pothole or curb. Impacts to the side of the rim from falling down or crashing can also cause damage. It may be possible, in some cases, to repair the wheel with adjustments to spoke tension. Begin by checking relative tension in the damaged area. For example, if a wheel deviates in one section to the right, check left and right side spoke tension in that area.

Adjusting spoke tension on a wheel with a badly bent rim is unlikely to help, except possibly to get the rider home. In the above example, if a wheel deviates in one section to the right, but the spokes on the right side appear relatively loose and the spokes on the left side of the wheel appear tight, the rim metal is bent. Normally, to correct this wobble, it is necessary to tighten left side spokes, but the check showed the left side is already tight. The option of loosening right side spokes is not very effective because the right side spokes at that section are already loose. This indicates the rim has been deformed beyond the point where spoke tension can repair it.

It can happen that a spoke becomes bent or mangled. Typically, this is just a cosmetic flaw. When spokes are manufactured, they begin as stainless steel wire on huge spools. A piece of wire is cut, and a head is stamped on one end. The other end is rolled in a die to form threads. The end with the head is then bent 90 degrees. That’s it, it’s just a cold-set bend. This bend is the most severe bend the spoke is likely to see. So, if your spoke gets mangled during a crash, it is unlikely to be as severe a bend as the original factory bend. Keep riding the wheel, and one day the mangled spoke may break, but it will most likely break at the weakest point, either the factory bend, or the threads.

If the wheel is not repairable by adjusting spoke tension, the rim has been bent and will need replacement. If the old hub is in good condition, the rim can be replaced and new spokes and a new rim laced around the old hub. This process is best left to professional mechanics.