In 2005, the Simbaz sophomore outing at the burgeoning Cape Epic was even more impressive as they finished 15th in an even stronger field of top professional mountain-bikers from around the world.

Their strategy to hang on when the “heads-of-state” set brutal pace, and try and sneak a stage win when tactically possible led them to great adventure during the race. They also got to display the famous Kenyan camaraderie by helping out incumbent and mountain bike greats Karl Platt and Carsten Bresser

Here is an excerpt from cyclingnews.com that illustrates the spirit of the epic perfectly and also the Corinthian spirit of sportsmanship that the Safari Simbaz nurture within their ranks. 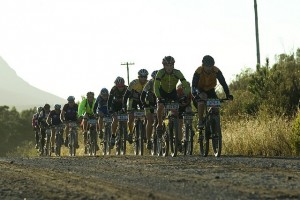 Today was a disappointing day for last year’s winner Karl Platt (GER) and his Rocky Mountain team partner Carsten Bresser (GER). Five flats cost them lots of time and their number 3 position in the overall ranking. It could have been worse, if there hadn’t been two Kenyan riders in the front field, David Kinjah and Davidson Kamau of team Imperial Logistics3, who were willing to help. “We were riding with the top guys, trying to work with them, when we hit bad road,” David explained. “Carsten and Karl had several flat tires. We noticed them all the time. They were having a real bad day. But they were able to fix their flats very quickly until they ran out of good tubes. So we gave them ours. Then they had no more air cartridges, so we gave them one of our pumps and asked them to give us their old tubes, in case we would have a flat tire, since we had a repair kit with us. And shortly after that we actually had a puncture. But we were fine fixing it. These guys don’t hurt us as we are not riding in the same league. So why not help them to reach their goal? You have to understand the tactics of the race and you need to make friends.”

David and Davidson are very modest. Although they have found a supportive sponsor in Imperial Logistics they don’t want to be treated like they’re special. They prefer to sleep in tents in the race village instead of B&Bs. “Last year it was fine for us to stay in a tent, so why should it be different this year? Even lots of veterans sleep in the tent. The services here are fabulous, we have a great time, and we can save our sponsor some money. Our advise to everybody is go to the Cape Epic and be a part of it. If you take it as it is it will be a once in a lifetime experience that you won’t forget whether you finish first or last.”