Simbaz David Kinjah and Davidson Kamau were invited to the inaugural Cape Epic in 2004 under the sponsorship of Imperial Logistics. This in itself is a recognition of their high standing within the African cycling community. They went on to give an excellent account of themselves finishing a very creditable 10th. amidst a top crowd of professional world cup, marathon and stage epic champions. 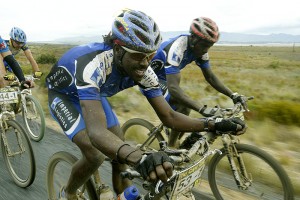 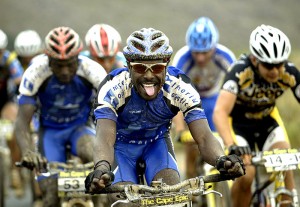 On the cusp of a stage win on stage 5, they were in the lead over several kilometres with an impressive gap by three and a half minutes. However, they could not maintain their advantage when the other leaders started chasing them and were caught just outside Greyton. Eventually they came in third after a tight sprint finish. Team GT Africa won the stage followed by the Dutch team Tom Tailor/Santos/ Walkabout with Crocodile Trophy Champion Jaap Viergever and Dennis Teeuwen. 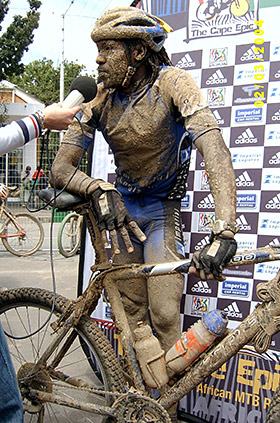 Here is an excerpt from cyclingnews.com

“Today’s stage was very flat”, says Shan Wilson. “The bunch at the front was a lot bigger and tactics played a great part. We had to keep the pace high to avoid people coming back onto the Peleton, so the race was very fast and very hard.” Asked about the performance of the Kenyans, Wilson says: “I am very impressed. We dropped them earlier in the race in the first climb. Later a group of ten riders came back to the leading group and they were in it. In Riversonderend they had luck with the headwind and started an attack, we only caught them near the finish line. Congratulations to the Kenyans, they rode a very good race.” Both Kenyans were impressed by the sportsmanship of the European riders. “We are not very good sprinters, so they said we should go ahead and start the sprint and they gave us an advantage”, explains David Njau who was not disappointed that he didn’t win the stage. “I always want the best team to win. They caught us and they were better in the sprint finish, so it’s ok for me. We are very happy with our third place today.”

David and Davidson surprised the top competitors at this level with their quality in a top field of world mountain biking greats, and this put Kenyan cycling on the map continentally, in a way it hadn’t previously been.