They went, they rode, they conquered. That is the story of Davidson Kamau and David Kinjah, two Kenyan cyclists who crossed the finish line amongst the top five during August’s Tour de Rwanda. Kamau punched the air with both fists as he crossed the line at the front of the pack, way at the front, with the second cyclist coming more than five minutes later. Kinjah finished fourth. Their victory, however, didn’t come easy.

Tour de Rwanda featured seven teams, with the hosts Rwanda entering five. The other two were Kenya and Uganda.

The Kenyan duo got to Rwanda, oddly enough, under the invite of Ugandan cyclists, instead of through the Kenya Cycling Federation. This didn’t bother Kamau and Kinjah. They were in Rwanda, their bikes were great and they had a thousand hills to conquer.

Challenges came earlier than expected. During the time trials, Kinjah discovered that he had to beat more than just the clock. Word had gone round about his conquests on two wheels and sensing defeat, some opponents sabotaged Kinjah’s bicycle. Both tyres on Kinjah’s customised bicycle run flat after just five kilometers. Kinjah fixed the flats, got back onto his bicycle and pushed hard to finish fifth in the forty-nine kilometre time trials. Abraham Ruhumuriza of Rwanda finished at pole position.

Tour de Rwanda is set in Rwanda’s picturesque hills and as Kamau and Kinjah discovered from stage one of the nine-stage Tour, riding Rwanda’s hills is anything but picturesque. According to Kinjah, there is no flat surface in Rwanda; you are either going up or down a hill, and for them, it was mostly up. Kinjah, who also doubles up as Kamau’s coach, had foreseen this and made sure he and Kamau had trained enough, riding up and down Kenya’s highlands and rift valley. 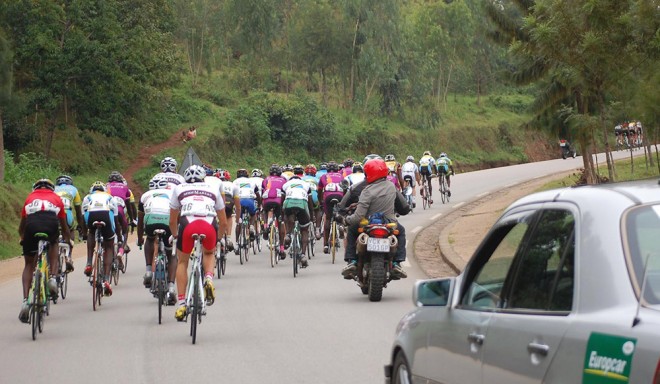 As the cyclists put on their clips and tightened their helmets at the starting line, all eyes were on Rwanda’s Abraham Ruhumuriza, favourite to win the race. But by stage three, all eyes shifted to Kamau who proved he was the man to beat. Abraham tried to take a glimpse at the face of the man who was beating him but all he got was a glimpse of Kamau’s back… from a distance. Kamau took the coveted jersey at the end of the first and third stages. He traded it with Kinjah for the second, fourth, fifth, sixth, seventh, eighth and ninth stages.

The Kenyan duo had a very strategic ride, with Kinja, having more stamina than Kamau, leading the challenge during the hill climbs. Kamau, the aggressive of the two riders, lived up to his nickname and terrorised the other racers to lead the rest of the time.

At the end of stage five, Kamau had stretched his lead to a massive nine minutes. He was enjoying the after-race massages by the time some contestants were crossing the line.

Kamau’s lead was however threatened by Rwanda’s Adrian Niyonshuti who sliced Kamau’s lead to seven and a half minutes at the end of stage six. For stage seven, Kinjah pushed Kamau to his limits and Kinjah won the stage, Kamau coming a close second. By now, the race was firmly in their hands, and not even Ruhumuriza could offer a challenge.

At the end of the Tour, Davidson Kamau emerged tops, cycling 1,217 kilometres in 35:44:24. At the awards ceremony, history books were opened and Kamau allowed to engrave his name as the first foreigner to win the Tour de Rwanda – in his first attempt!

Kamau and Kinjah returned home and were received by a small crowd of family and fellow cyclists. Not a single government official was at hand to congratulate them for their achievements. But it was okay for them – they didn’t expect it.

Davidson Kamau works part time at a slaughterhouse in Kiserian, twenty-five kilometers from his home. He rides to work, preferring a route that isn’t for the faint hearted, through parts of Ngong Forest, oblivious of the danger of running into mean buffalos and unforgiving hedgehogs, sometimes in near zero visibility because of fog. Winning the Tour de Rwanda was quite an achievement for Kamau having started riding seriously in 2003. Before that, he rode a bicycle taxi, or what they call in Kenya ‘boda boda’. He gave a high five to Kinjah his coach and cycling partner who’d seen his potential and taught him how to weave the fine strings that make a cycling champion.

David Kinjah is one of Kenya’s greatest cyclists. He captained the Kenyan Cycling Team to the 2006 Commonwealth Games and has ridden in the 2001 Crocodile Trophy in Australia, Willingen Bike Marathon in Germany in 2003 and the Cape Epic in South Africa where he and Kamau teamed up to finish tenth overall in 2004 and 2005. Kinjah runs a training camp for upcoming cyclists in Kikuyu, thirty kilometers west of Nairobi.